I was itching to make an entremet again after a long pause from my last one. I've been eyeing this particular recipe for the longest time ever, and knew that I should not procrastinate any longer and just do it (as Nike says). :) 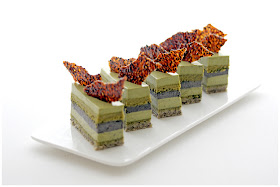 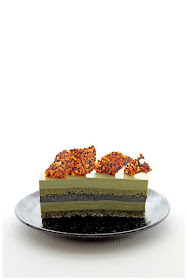 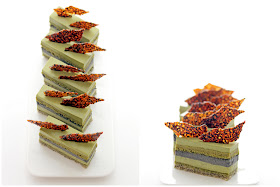 It's not the first time I've experienced a problem with the black sesame mousse recipe, I think I used it previously for my chocolate hazelnut mousse cake, and had some problems with it (that time prob due to the gelatin).

It most probably is my fault again (sobs), cos Evan didn't have any problems with it. Once bitten, twice shy obviously didn't penetrate through my mind, and as I didn't meet with success, I probably wouldn't attempt it a third time. This time, there was a problem when I was making the black sesame mousse, the mixture sorta curdled and seized after I tried heating the mixture on the stove (step four). It was separating like crazy and I was just about on the verge of tears and about to give up. Thanks to the Sis who salvaged the situation by saving the seized mixture. She suggested adding some milk to smooth the mixture and heating it again. And the mixture eventually became a smooth paste consistency again. *Phew* Don't let my failure deter you from the recipe though! It's really manageable, as long as you are not me...who is super outta practice of making cakes. :(

As I modified the recipe slightly just by adding a layer of sesame sponge, I felt that the overall cake tasted more of black sesame rather than matcha. The cake tasted better on the second day after the flavours had time to meld together. 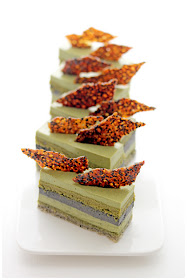 Dissolve matcha in hot water and set aside. Sift cake flour and set aside.
Whisk yolks with 3 tsp sugar and vanilla until pale and fluffy, then whisk in the matcha mixture.
In another bowl, using clean beaters, beat together the remaining sugar and egg whites till stiff peaks.
Fold in whites and yolks mixtures together, followed by cake flour and melted butter.
Pour mixture onto a baking sheet and bake on 180C for 20 mins or until skewer inserted into the middle of cake comes out clean.

Method as per matcha sponge above.

Mix matcha powder and sugar in a bowl.
Heat milk over stove until boiling and pour into matcha sugar mixture. Whisk until smooth.
Add the softened gelatin and leave to cool. Strain mixture.
Whip the cream till soft peaks and fold into the above mixture.

Make the pate a bombe by heating sugar, glucose syrup and water until 120C.
Lightly whisk egg yolks and pour in hot sugar mixture and whisk on high speed until pale and fluffy (and the bowl is cool to the touch).
Microwave black sesame paste until warm, then add in softened butter and mix well.
Add the black sesame mixture into the egg yolk mixture, then heat on stove until 85C.
Soak gelatine in cold water until soft, squeeze off excess water and add into the above mixture and stir to mix. Strain and leave to cool.
Whip the cream until soft peaks, add in 1/3 of the cream into the above, followed by the rest of the cream.

Melt glucose syrup on low heat then add in water, butter and fleur de sel.
When completely melted, add sugar and heat until boiling.
Remove from heat then stir in the sesame seeds and mix well. Quickly pour the mixture on a silpat then put another silpat on top and roll out thinly.
Chill in fridge until set, remove the silpat on top and bake on 170C for 10-15 mins until bubbles appear. Leave to cool and break into pieces.

Place the black sesame sponge at the bottom of a " square cake ring, then brush generously with syrup.
Pour half the matcha mousse onto the sponge and refrigerate until firm.
Pour the sesame mousse on top then place matcha sponge on top. Brush sponge with the rest of the syrup then pour in the rest of the matcha mousse.
Freeze cake until firm.
Release cake from ring, trim sides and slice into desired size and decorate with the sesame nougatine pieces.
Michelle at 11:26 pm
Share